On the occasion of his 60th birthday. 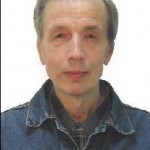 In 1975 he finished his graduate studies in the Department of Differential Geometry of MSU. In 1976 he defended his Ph. D. thesis entitled New Results in the Theory of K-Spaces, in which he obtained a series of deep results on the geometry of one of the most interesting classes of Hermitian manifolds.

He developed a new apparatus for investigation of almost Hermitian structures and applying it obtained many results published in prestigious Russian and foreign mathematical journals as well as in his monograph Differential-Geometric Structures on a Manifold (Moscow, 2003). These results were reported in the series of international conferences including the 4th International Congress of Mathematicians (Zurich, 1994) and the 2nd European Mathematical Congress (Budapest, 1996).

Kirichenko was a supervisor of many Ph. D. students. Up to now, 26 his students defended their Ph. D. theses.

We, friends and colleagues of Vadim Kirichenko wish him good health, happiness and success in his research.