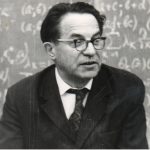 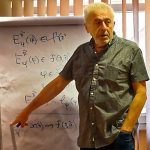 Conference dedicated to the 70th birthday of Joseph Krasil’shchik

The conference Local and Nonlocal Geometry of PDEs and Integrability will focus on the geometry and algebra of differential equations, differential geometry, integrable systems, mathematical physics, and all that. This is a conference in honor of Joseph Krasil’shchik‘s birthday and his many contributions to all these fields.

For any questions, please email the organizers at trieste18@gdeq.org.

On the occasion of her 80-th birthday. 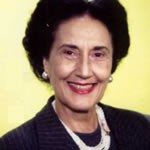 We indicate some results of M. T. Calapso related to the works of hergrandfather P. Calapso and her father R. Calapso.

M. T. Calapso continued the study of non-Euclidean geometry initiated by her grandfather P. Calapso and her father R. Calapso. In particular, M. T. Calapso considered the Poincaré conformal representation of a hyperbolic plane on the Cartesian half-plane  and showed how to obtain all properties of the plane hyperbolic geometry using only notions of the Euclidean geometry and the traditional analytic geometry. She found the formula for the distance between a point and a line, the latter being mapped into a semi-circle orthogonal to the absolute and some formulas involving a right triangle in hyperbolic geometry.

She also continued research of her grandfather’s and father’s research in conformal geometry. By the Liouville theorem, the only conformal transformations  are the products of the similitudes (homotheties), inversions, and motions. In the complex case inversions should be replaced by the Ricci transformation.

Maria Teresa Calapso is an Ordinary Member of the Accademia Peloritana di Messina since 1976 and an Honorary Member of the Balkan Society of Geometers since 1998. She is an Editor of the journal Rendiconti del Seminario Matematico di Messina.

We, friends and colleagues of Maria Teresa Calapso, whole-heartedly wish her a plenty of health, happiness and further success in her research.